On the 23rd of June the Britain shall vote to stay or leave the EU. Like a lover asked to choose between marital life and the supposed riches of bachelorhood, the people shall vote on a decision which in any case, will define the lives of generations to come. On the other side of the channel, there is a sense of disbelief – surely Britain cannot hope to rule the seas once more and sabre-rattle alone against the Chinese economy should the need arise. Yet the campaign has not been based on rationality – economic, fiscal, defense-orientated or otherwise – but rather, on pure social dynamics – and for this reason alone, the leave campaign might just win.

I’m afraid Dave is just not one of us

Like in many EU member states, Britain suffers from a lack of legitimacy of its political elite: whether it be the conservative party in its “chummy eco-friendly” version struggling to shake off old clichés, the now next-to-inexistent liberal democratic party, or indeed the Labour party (in the midst of clannish brooding before an inevitable clash between Corbyn-esque tieless socialists and suited and booted Blair.2 bots) the major parties in Britain fail to inspire a large segment of the population. However, whereas this is hardly news, this largely apolitical segment of the society now has the opportunity to change their everyday lives and more importantly, show the ruling elite that they really do matter. This, when combined with the incessant eurobashing that the ruling party itself encouraged in the recent election campaigns, has created not only the euro-technocrat bogeyman but the possibility for the ordinary citizen to seemingly decide his future whilst sticking two fingers up both to Bruxelles and to Westminster. What a potent cocktail. 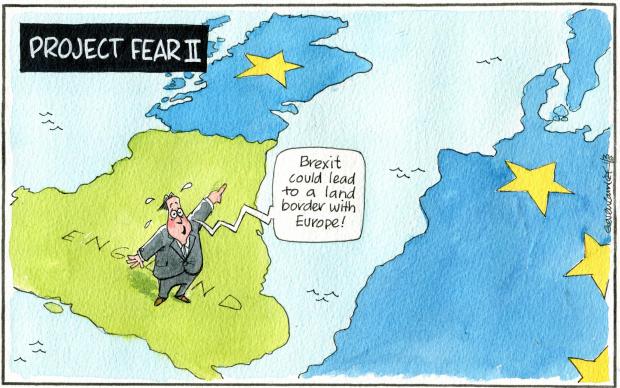 Unfortunately for the remain campaign, the Brexit referendum is too close to the Scottish referendum for the British public to have forgotten the tactics used by the “remain united” camp to scare indecisive scots into voting to stay with the southern partner. Indeed, any and all of the major tabloids covering the Brexit referendum are quick to point out the scare-mongering tactics that both camps use to sway voters. However, more damningly for the remain campaign, the fact that the Scottish referendum is still fresh in the collective memories of the British people (even for those who themselves were not called upon to vote), means that any indecisive voter will be instinctively more impermeable to the scare tactics because of his previous exposure to the catastrophe-laden hypotheses given during the brief period of possible break-up of the British isles.

Underneath the political wrangling, the Brexit is ultimately the debate over Dave’s succession – in short, will it be Boris Johnson, or some ally of George Osbourne, if he himself does not run. The problem with such an internal partisan division is that it weakens the image of Dave’s own party, but more importantly, it weakens his own campaigning. In layman’s terms, how can the average man vote for the “remain” campaign when a sizeable chunk of the conservative party itself (albeit for pragmatic personal reasons) is voting against the desires of the party leadership. Yet this quagmire has been Dave’s own doing – to surf on and stoke feelings of resent and even misplaced hatred towards the EU was for a long time the most deadly barbed arrow in his electoral campaign quiver – however, just like an inept arsonist, Tory leadership has created something that they cannot control when the time comes to put aside the electoral spin and focus back on reality. The task of his successor, whichever way Britain votes, will be arduous: a “remain” vote will tarnish the politician in question as simply being a vassal to a supposed Brussels overlord (despite “renegotiations”), whilst a “leave” vote will potentially weaken Britain economically and geostrategically.