Accéder au contenu principal
Jérémy Ghez, you are a Professor of Economics & International Affairs and affiliated to the Centre of Geopolitics at HEC Paris. The new French President has been the most vocal pro-European candidate during the campaign. how far can he go on a rapprochement with German Chancellor Merkel?

He must go as far as he can if he is serious about his pro-European stance. The distance between Paris in Berlin, these recent years, has been quite unsettling for observers because it is hard to imagine how the European project can make any progress if there is a potential strategic decoupling between these two European leaders. It would be even more unsettling to see the French and the Germans remain passive in the current context of American withdrawal. You can’t complain about Donald Trump and not be ready to contribute to international stability when you’re a European. That is an equation that Emmanuel Macron has perfectly understood it seems. He’ll have a hard time to solve it without German help.

In addition, the new president would be foolish not to pursue a rapprochement now: the timing is ideal and he is unlikely to have this much bargaining power in the future. His election was a relief to many in the Western world and in Germany in particular, not only because nobody liked the alternative, but also because his election signaled that France was back in the game, ready to make the reforms that everyone has been expecting Paris to undertake for quite some time. France’s European partners undoubtedly and legitimately expect a lot from Macron. But Macron, conversely, can also ask a lot from Berlin, arguing that if the Germans don’t help him, they will need to deal with a far less open leader in five years. That seems to be in no one’s interest. I think Germans will be far more open to Macron’s requests as a result. 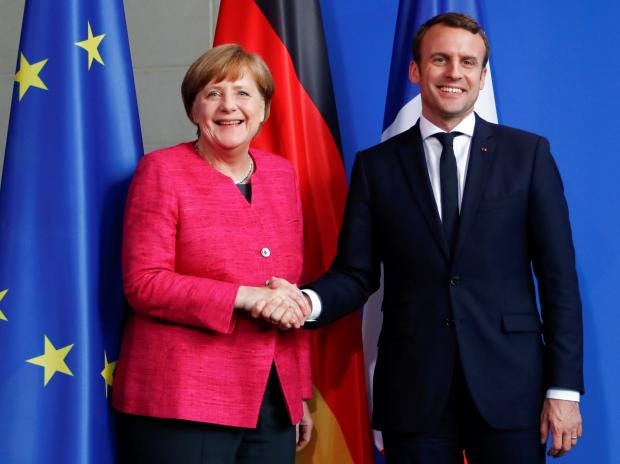 He is also supposed to be more tough on Brexit than some of his European partners. What can be expected from this? Does the absence of the UK leave automatically more leadership in Europe to France?

Macron has been very vocal about his willingness to attract key talents that are in London right now but whose interests could be undermined by a Brexit. It’s an interesting form of power struggle — not military in nature but economic. If Macron is successful in mastering this power struggle, Paris will gain in strength.

But it’s hard to say what will happen especially because we don’t know how « The » Brexit will actually occur in practice. In the aftermath of the Manchester attacks, the French president emphasized on the usefulness of security cooperation and sharing intel to better anticipate these attacks. How does that shape the way the Brexit occurs in the future?

Similarly, it’s important to remember that the defense and security cooperation agreements between France and the UK are independent of the EU: the 2010 Lancaster House Treaties are ad hoc agreements that are likely to survive the Brexit because both parties need the other to guarantee security over the continent and at its borders. That, too, is unlikely to change because these agreements are in everyone’s interest.

Ultimately, the reinvention effort of the EU is one that no European figure has had the courage to undertake since 2005 and the failure to ratify the European Constitutional Treaty. This is the form of leadership we lack and that the Germans will never deliver on for historical and cultural reasons. France seems to be the likeliest candidate. Macron’s ability to offer a new vision for the EU, one that is adapted to the current challenges and that recognizes the institution’s shortcomings, will be crucial as a result.

The President has already shown his interest in military affairs, going to Mali early after his election. How do you assess his presence in his first international summits?

Macron is a source of interest for the rest of the world. So many people seemed to believe that France would be the next domino to fall. That did not only turn out to be false. What ultimately happened defied expectations: it was not the incumbent or the establishment party that defeated the populist options, it was a new political force, that literally came out of nowhere, that did the job. France, in essence, may be ground zero for reinvention in the wake of the populist revolts across Western nations, and Macron, unwillingly, in the lead on offering an antidote to this populist phenomena.This means Macron can enjoy a sustained period of honeymoon with international leaders he is unlikely to benefit from at home, given how divided France is. That presence in international summits is therefore essential to build up his credibility. He’ll be all the more so legitimate when he asks the French population for efforts at home.