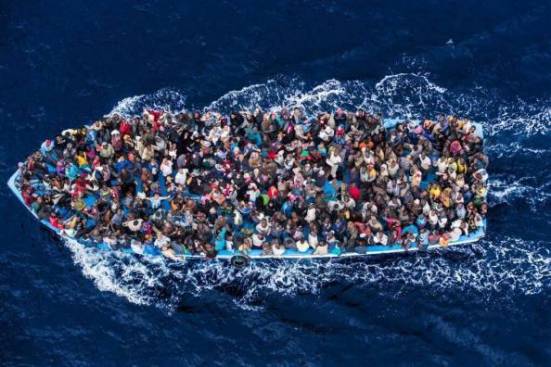 As the European Union currently presents plans to shake up the current migration policy, in view of distributing the migrants more equally across the member states and alleviate the pressure felt by the coastal countries (especially Italy), it has become rather obvious that this policy cannot be durably changed without increased participation (and not only cooperation) of the Arab states at the very least, and most probably certain African countries themselves.

Far from proposing a naïve paradigm-shifting vision of great social change in the homelands of the migrants (doubtless the merit of such a policy may be), tackling the cause of the problem is essential in order to limit the number of casualties along the journey and the exasperation (a convenient fuel for sectarian politics) of the recipient authorities.

A migration generally has a departure point and final destination – the survivors of the horrendous journey (traffickers, the Sahara desert, the sea, the humiliation of detention) all express a clear wish to enter the European Union and for the majority, settle in a specific country. Shutting the door only increases the pressure on the immediate outside. Cynically hoping that the sea will claim a few and deter enough from embarking on the journey is to underestimate the power of desperation and the allure of a more comfortable living.

Alongside a reinforced patrol policy, the responsibility of local authorities on the southern shores of the Med in cracking down on the human traffickers must be attributed a renewed importance. Sure, the situation in Libya is catastrophic, but that in Egypt, in Tunisia or in Morocco is relatively less chaotic (though problems persist in the Sinai Peninsula). Imposing heavy penal sanctions on the human traffickers should be part of the bolstered arsenal. Why not blood the newly announced Arab League joint military task force on such a venture of helping the European and local authorities track down and arrest human traffickers?

Beyond the Med – why humanitarian aid can ultimately become dead aid

As the journalist Tanguy Berthemet recently remarked rather astutely on Monday 11 May in an article entitled “l’étrange silence des Africains” (the puzzling silence of the Africans), the migration problem is strangely absent from the rhetoric of the African leaders. Europe has for a number of years included in its African foreign policy the objective of a political partnership with African states, within which figures the refugee and migration question. Furthermore, in an attempt to improve the democratic process and the development of strong meritocratic principles, the European Union often associates its financial help with a number of preconditions (independent justice system, crackdown on corruption etc). However, in a multipolar world, the laudable objective of installing the rule of law and the respect of human rights in Africa is often thwarted by international competition from other actors less picky with such ethical dilemmas such as nepotism, torture etc.

Moreover attributing financial aid, even if only destined to improve the infrastructures of the countries, has been denounced as a short-term and counter-productive measure that ultimately incapacitates the countries. Far better to encourage the development of the economic sector, perhaps by loosening the customs policy and encouraging industries to implant branches of their activities in Africa.

Put yourself in a Sicilian’s shoes – to see boat loads of migrants being rescued on a daily basis can make you feel rather hopeless and more worryingly, cynical with regards to the supposed European brotherhood. Indeed, whilst it is true that Europe has a functioning border-control program (Frontex) the Italian parliament has on a number of occasions complained of the lack of support given to its own border patrols, and has expressed its exasperation of picking up a disproportionately large part of the bill (in financial terms as well as human resources) whilst other member states further up North happily continue with the daily chores.

However, as the Libyan crisis and subsequent exodus showed, if Italy or other Mediterranean countries be more lax in their border policies, Europe itself is thrown into a panic – think of France and its proposition of bypassing the Schengen agreement. At a time when the “Brexit” is seriously on the cards and when nationalistic tendencies are on the rise, the task of the European Union is all the more daunting but crucial: to share the burden equally and ensure that those southern member states do not feel abandoned to the point of opening the flood-gates in order to make their voices heard. A radical policy shift is needed – welcoming migrants across the European territory is not enough nor will it stem the flow in the long term – increased cooperation with the Arab and African states is needed, as is a beefed-up border policy. Back to the drawing board then….